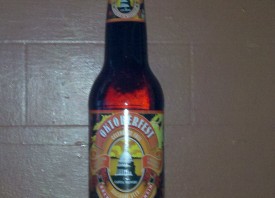 Read Part 1 & Part 2 about what this experiment is all about.

An essential part of the flavor of Janet’s Brown Ale is the dry hopping. Several ounces of hop pellets are added once the primary fermentation is completed, which adds a substantial hop flavor and aroma with minimal bitterness.

After allowing the beer to ferment happily for a week and a half, Andy and I got together to add the dry hops. Following Andy’s normal technique, we sanitized a few hop bags, added the hops and dropped them into the fermenter.

Once the deed was done, several beers aided our recovery from the strenuous five minutes measuring, then carrying several ounces from the upstairs to the downstairs(there were two whole flights of stairs!). Arrangements were made for bottling day one week later.