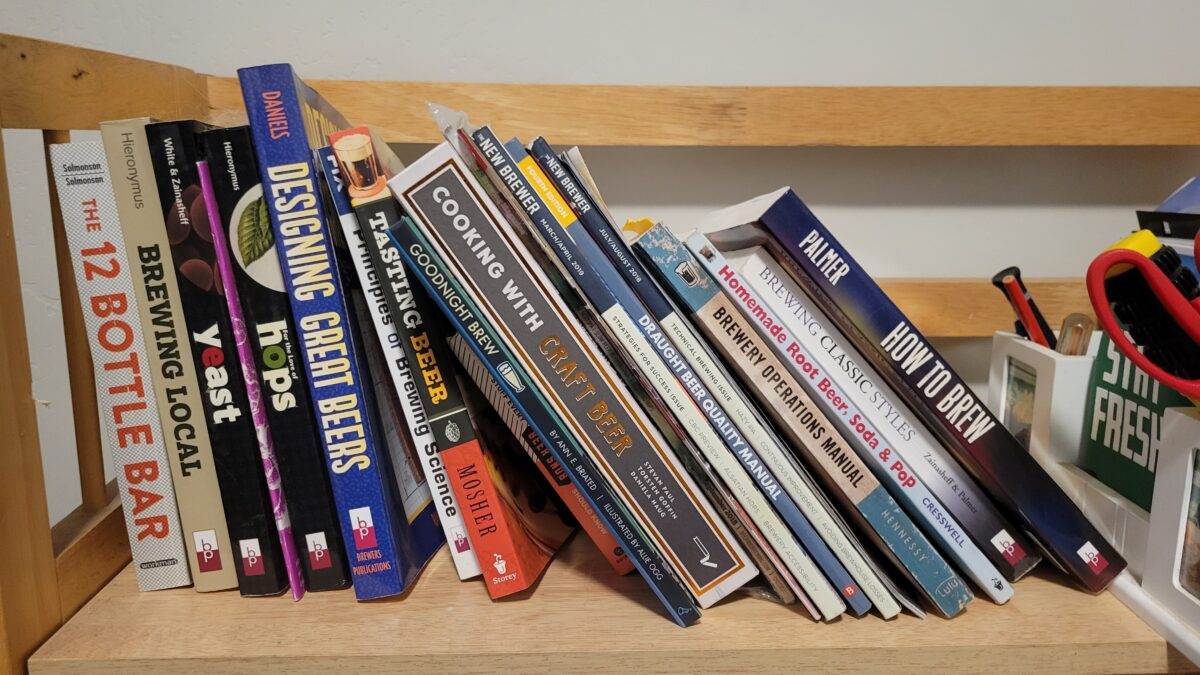 During the build-up to brewing my first batch of beer, and for the next few years, I became a sponge for absorbing information about homebrewing. Not starting brewing until 2007 meant I had a lot of podcasts to listen to, but I still found a few books that proved to be great resources when I ran in to questions or just wanted to read about beer quietly instead of listening.

I cannot say that I’ve read 100% of each of these books, but I read the portions I needed at the time. I found each valuable for different reasons, which I’ll try to articulate.

My favorite brewing book is not so much filled with technical information, but as a great source of inspiration. Brewing Classic Styles by Jamil Zainasheff and John J. Palmer is full of ideas. At the time it was released, they provided a recipe for every category in the BJCP guidelines. Since then, BJCP has added, merged, and tweaked style guidelines to be completely different than they were in 2007.

The beginning chapters provided me a good resource to get through my first few independent brew days where I wasn’t at a homebrew shop or a friend’s house.

My favorite feature was the (now outdated) hop character wheel on page 20. Rather than displaying the hops independently or as spike graphs, they plotted the hop characters spatially, with those exhibiting similar characteristics located close to each other. The primary characteristics  were around the outside of the wheel, and superscripted letters to add notes for flavors on the other side of the wheel. My brain found the relationships easier to understand this way than in any other layout I had seen.

But the real treasure was the recipes. When I wanted to try a recipe, this book gave me a write-up of what the style should be like, and a tested recipe I could rely on. As an experienced cook having a solid recipe to try, then tweak allowed me to learn which changes were important.

I still come back to this book when I want to target a traditional style of beer. I don’t use the recipes in this book as a base so much as a way to target the characteristics I want in the beer.

With the title How to Brew, you know John Palmer’s thesis on brewing will answer most (if not all) your technical questions. This book covers all aspects of ingredients, process, and equipment.

If you don’t have someone to walk you through the process, and you enjoy reading, this book will give you all the information you need.

While the two books above have been much more perused and had a direct impact on my brewing processes and recipe development, The Complete Joy of Homebrewing was the first homebrewing book I read. Charlie Papazian was an early innovator in homebrewing and the pursuit of finding an alternative to mass market light lagers.

Starting to homebrew before it was fully legal, Charlie’s book provided some great information and stories about the early days. E.g., using large plastic garbage cans as fermenters because there weren’t a lot of options for large fermenting vessels.

Some of the recipes in this book seem to have been written as jokes or thoughts about medieval methods: Cock Ale, or the recipe that calls for a racoon penis. Historical documents that discuss hanging the leg from a recently butchered animal in a batch of beer to revive a stuck fermentation. You’ll have to read them all just for the fun of it.

But when I say this book is the real foundation, I mean it. Sometime after writing the first version of this book, Charlie became one of the founders of the American Homebrewers’ Association. And over the years, that organization brought enthusiastic brewers into the hobby, inspired them to revive alternatives to Pilsner, and create new beers that required new definitions. Not only did it change the face of beer, he provided the greatest wisdom you will hear if you decide to make beer at home: “Relax, don’t worry, and have a homebrew.”

This philosophy has allowed me to developed into a good brewer. Some people choose to interpret this is, you don’t need to worry about anything, you’ll still have beer. To some degree, that is true: as long as you can do basic sanitizing, you’ll have beer. But the more things you are careful with, the more repeatable the beer you make will be.

But it’s not worth stressing out about. Even if you make a mistake, you can recover from most of them. And you’ll still have good beer.

You’ll encounter homebrewers who have literal meltdowns if they encounter any deviation from their expectations, but that’s not needed. We’re making beer, and while a noble pursuit, it doesn’t require perfection.

Once you get started, if you enjoy the hobby, you’ll want to learn even more. Here are some other books I’ve found valuable to explore different topics and generate ideas:

Thinking about trying to brew a batch? Go for it. Relax, don’t worry, and have a homebrew. Just wait until you’re finished with the brewing process.

Brew up an adventure!