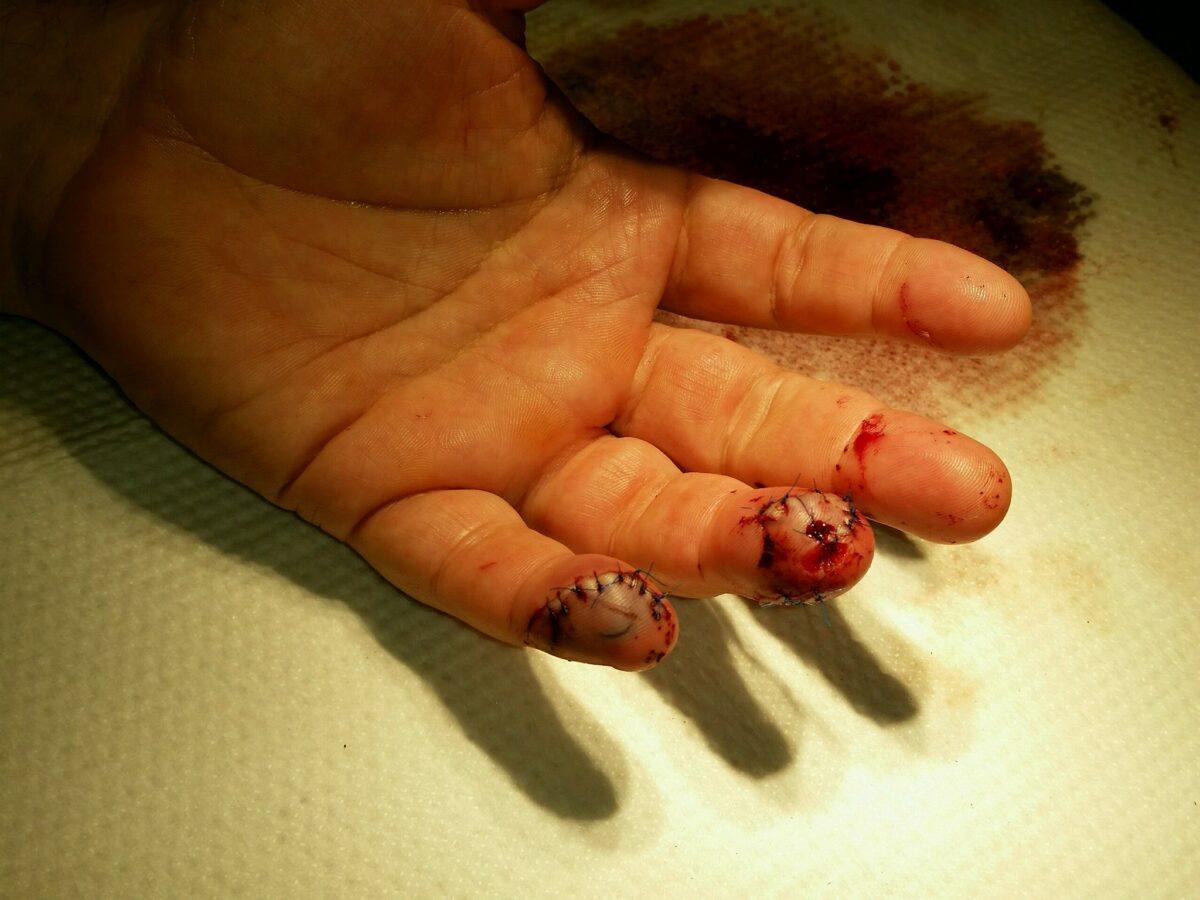 Warning! The images below show graphic injuries. I selected the least objectionable photo as the preview image and as the first example of the need to be careful when we homebrew.

Homebrewing is a hobby, and this caused me to be less careful than I would be in a commercial brewery. I am lucky that the worst injury I received was throwing out my back because I lifted a full mash tun incorrectly. Not a graphic injury, but I don’t think I’ve ever had pain that intense before in my life.

I get kind of upset when I hear fellow homebrewers talking about getting so drunk during their brew days they miss whole portions of their process. I mean, everyone makes their own choices, but the odds of receiving an injury like those below are increased if you are having trouble maintaining your balance because you’re inebriated.

OK, you had your chance to navigate away from this page. Continue at your own risk. The photos below are not mine, and were posted to a Facebook group back in 2017. I did contact each person to request permission to use these photos, and I received permission for each of the photos used below.

It may seem obvious, but glass does break. I had two friends have glass carboys break on them in separate incidents within a surprisingly short period of time. Glass carboys are strong, but the fact they are brittle also presents problems when they receive the wrong impact.

One friend was placing a carboy on a high shelf. When he placed it on the shelf and allowed it to swing back, it hit the carboy next to it, broke in half and the top portion slid down and almost landed on him. Luckily, he was not injured.

Another friend had a full carboy break when he was setting it down on a concrete floor. It split about halfway between the top and bottom, slide over and cut open his palm, forcing him to the emergency room for stitches across his palm. The injury pictured below was a similar situation, but cut the fingers rather than the palm.

I don’t know the percentages, but many homebrewers use propane burners to bring their wort to a boil. As a result, the sides of kettles get very hot! If you are using a converted keg, there is also a ridge of metal that gets even hotter than the side of the kettle that has liquid on the other side.

If you don’t pay attention to where you are, it is easy to accidentally back up against your kettle and burn the back of your leg, as shown by this photo.

I did not get a picture of this, but a friend accidentally spilled undiluted Star-San on his arm. This is a concentrated acid used to sanitize equipment and eliminate bacteria that could negatively affect the flavor of the beer we’re trying to make.

My friend was able to rinse away the concentrate within 10 seconds. In that time, though, it had already peeled away his top layer of skin, leaving a patch of skin that felt “like road rash”.

The greatest danger is probably the amount of hot water we move around between different vessels. These pictures are the most disturbing to me, and are great examples of what can happen when we make mistakes.

Burns, and especially scalding injuries are extremely painful and also have a high potential for permanent damage.

If you have children, these are also some of the injuries that could be most like to be inflicted on a curious child who just wants to see what you are doing. Try to limit access to your brewing space to those who are capable of understanding the dangers and risks.

This injury was probably caused by an open ball valve or accidentally dropping his hand into a boiling kettle. Regardless, you can see the middle and ring fingers showing damage beyond the top layer of skin.

When you are brewing, make sure the valves are closed on any vessel you are transferring into. I’ve had things happen where my kettle’s ball valve was open when I was filling it, but happily, no one was on that side of the kettle.

I believe these next two photos were from the same individual. I don’t remember if this was a case where kettle tipped over of there was an open ball valve. But regardless, the person was wearing mesh-topped athletic shoes.

Not only did this result in the hot liquid immediately passing into the shoe and burning his feet, but his socks and the shoe actually held the boiling liquid against his skin to do more damage.

This next injury was from a kettle falling and spilling the contents onto this person’s leg. The picture shows what it looked like after enough time had passed he needed to change the bandage, and it is still disturbing.

The injured person was kind enough to send a follow-up photo of what the injury looked like after 18 days of healing. It still looks pretty gnarly, but amazingly well-healed.

Be careful on your brewdays!

Pay attention and stay alert, because you can still make mistakes. Hobbies are meant to be enjoyed, and homebrewing is no different. Take care of yourselves!